As we pulled up to the deserted farmhouse that would be our home for the next two weeks we knew our worst fear (and everyone’s secret fear) had been realized:

We were starring in a horror movie. 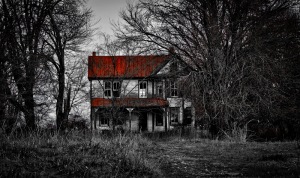 Not our farm…but you can imagine what’d be like if it was. Right?

In keeping with the genre, our adventure thus far had been sunny. Indulgent even. Just long enough for anyone watching to build a rapport and see our contentment before the scatological sample hits the fan, as they say. We’d seen enough movies to know this was a likely possibility when we planned the trip—it was largely the reason we’d avoided deserted farmhouses in the past (as well as most of the southern US, children, eastern Europe, old fisherman, prom, janitors, secret societies, crypts, tastefully satanic rituals, anyone masked or wearing someone else’s skin, and devastatingly handsome diamond-faced vampires who’s very gaze threatens to turn you into a vapid teenage girl).

So, as a necessary precaution when planning our trip, I had vetted potential hosts against horror tropes before reaching out to them. Veronica tolerated the screening process:

“No. If something is gonna eat my brains it’ll be a zombie. Not a ‘kiwi family looking to share our home with fun, outgoing individuals.’ That practically screams HANNIBAL LECTER.”

What truly disturbed me as the giant stalks lining the drive rustled ominously was the utter lack of choice we had in the whole, “stuck in a horror” matter. Where was my free agency? Despite our best efforts here we were, parked in the dust outside of an empty house. Soon curiosity would get the best of us and we’d poke our heads in the (slightly ajar) front door. After a quick peek inside–and maybe calling out, “is anybody there”–Veronica and I would split up, sealing our fate.

We never got the chance.

Instead, a 10-year-old girl burst from those swaying plants and started making her way towards us like a tiny T-1000. She stopped a pace from us. I held my breath.

“Hello,” beamed Veronica while scolding me with a sidelong glance.

“Hi, I’m Amber. Mum’s out at the shed getting stuff for the Guy Fawkes party,” was the jaunty reply.

And thus did The Great Dairy Farm Experiment begin.

It wouldn’t be as terrifying as I imagined (quite the reverse), but there were still horrors among highlights. Veronica and I are excited to share them both with you over the next few days. I’d promise we’ll be better about posting once you’re all caught up, but given how quickly I went from zero to “oh no, this is exactly how I imagined it would happen” territory, stability is a concern.

Let’s just hide and wait instead.

2 thoughts on “(Re)Setting the Stage”